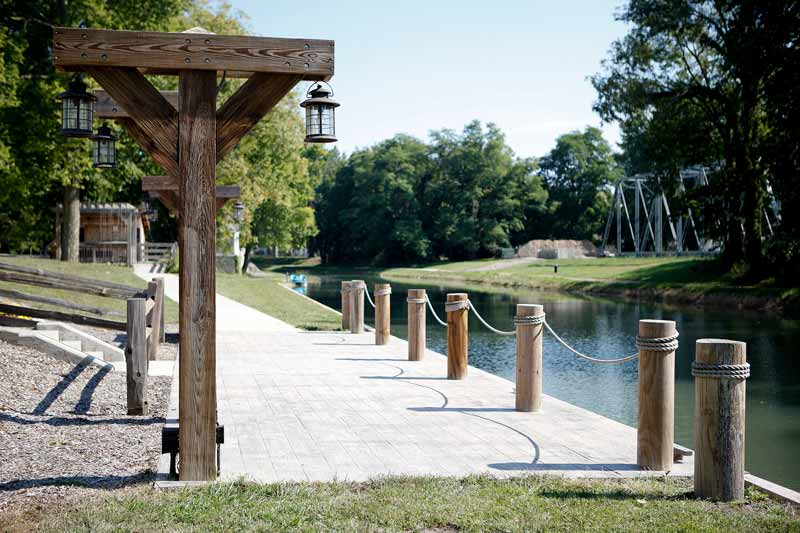 In 1994, US Aggregates began its collaboration with the Wabash-Erie Canal Association in Delphi, Indiana.

At that time the Canal Association was initiating its vision of a restored and working section of the 1850’s era Wabash-Erie Canal. The Delphi section of the canal, although intact, after 140 years was only a ditch. The most critical component to the restoration of the canal was water, and US Aggregates had an ample supply from its mining operation.

In 1996, US Aggregates began constructing 1,600 feet of 12 inch water line from the quarry over to the north end of the canal.

The water was transformative and the Wabash- Erie canal was again becoming a true canal. Over the years, U. S. Aggregates has donated land for the creation of the Canal Park Annex. The company has donated the aggregate for the construction of what is now 9 miles of walking trails along the canal. US Aggregates donated stone to help with the construction of a $3 million Canal Interpretive Center and Museum. The company granted the canal association access to property that contained an intact 1850’s lime kiln. The canal association carefully excavated the kiln from the company’s property, and rebuilt the kiln on a site near the Canal Interpretative Center.

Four years ago, The Canal Association was awarded a grant for the construction of a 2/3 scale canal boat.

The boat named the DELPHI, is starting its fifth summer carrying visitors up a down the restored canal. Water was the key to making this a reality! The Wabash-Erie Canal Association is continually grateful for all the help US Aggregates has provided over the last 20 years. Thousands of people have now visited the canal from all over the United States and from around the world. The canal, the interpretive center, the park, and the walking trails have transformed Delphi and US Aggregates was glad to have been part of the vision.